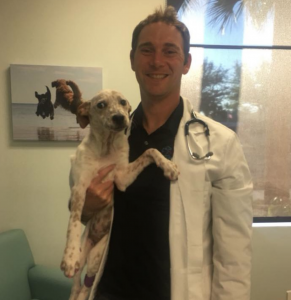 Bonnie, a 4 month old mixed breed dog, was presented to her primary care veterinarian for suspected neck pain 2 days after having run into a fixed object in the yard. Radiographs of the cervical spine were performed at this time and she was immediately referred to SCAN for further evaluation and treatment

Upon arrival to SCAN, Bonnie was quiet, alert and responsive with a low head carriage. She was ambulatory and had normal proprioceptive testing. Evaluation of segmental reflexes and cranial nerve function was unremarkable. Due to obvious signs of cervical discomfort (low and guarded neck carriage, muscle spasms), cervical range of motion was not performed but no other discomfort was found upon spinal palpation. The neuroanatomic localization was to the cervical spinal column causing pain alone.

Review of her radiographs showed a comminuted fracture of the C2 vertebral body with dorsal and cranial displacement of the remainder of the cervical spine causing severe dislocation of the spinal column at this site (Figure 1). 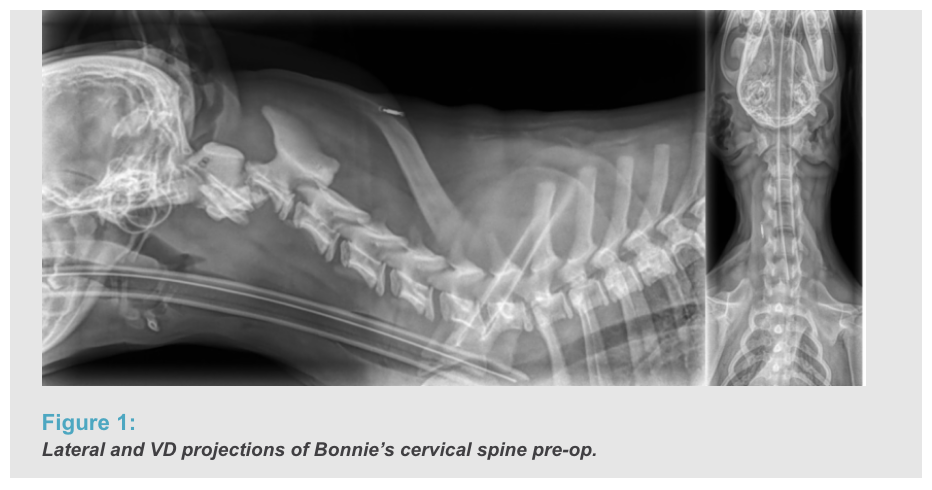 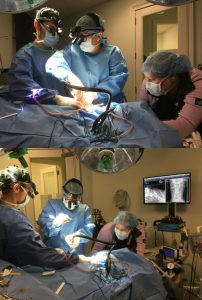 Bonnie was admitted to SCAN and immediately started on a potent analgesic protocol and surgical correction was planned for the next day.

A ventral surgical approach was made to the cervical spine and the vertebral bodies from C1 to C4 were exposed. Bilateral, bi-cortical laminar pins were placed into C3 and the caudal fragment of C2, and trans-articular pins were placed at C1-2 on each side.

The fracture site was (very carefully!) re-aligned and apposed via traction, while bone cement (poly methyl methacrylate) was placed around the implants at their entry site into the vertebral bodies (Figure 2). 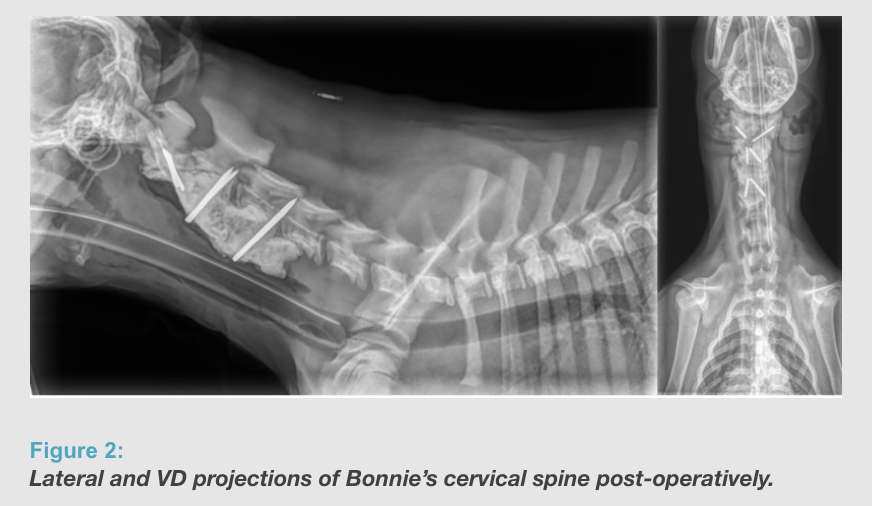 Bonnie’s recovery was uneventful; she was maintained on a Fentanyl CRI (4 mcg/kg/hr) until the morning following the procedure. She was successfully transitioned to oral medications day 1 post-op and discharged from the hospital the same day. At her 1 week recheck, Bonnie was acting more like a puppy and appeared very comfortable with a normal neurological exam.

Bonnie will be under orders for strict cage rest for the next 8-12 weeks. Re-check radiographs are planned at monthly intervals until complete healing occurs. The prognosis for a complete recovery is good.

In a retrospective study performed by Hawthorne et al in 1999, cervical fractures in dogs are most common from vehicular accidents (HBC) and most likely to involve C1 and C2 vertebrae. This study reported a high perioperative mortality rate (36%), but all surviving dogs achieved a functional recovery. Prolonged interval from trauma to referral as well as severity of neurological deficits were associated with a poorer outcome. Therefore, early cervical immobilization and prompt referral were the recommended conclusions of this study.